In order to let computers to work for us, they must understand data: not just the grammar and the syntax, but the real meaning of things.

KEES proposes some specifications to describe a domain knowledge in order to make it tradeable and shareable.

A domain knowledge is something known about a specific argument (e.g. a set of producs, commercial offerings, a social network, etc. etc). Knowledge domains are additive, there is no limit to the knowledge domain perimeter nor to its size.

KEES allows to formalize and license all you need to build a knowledge domain, that is:

Both machines and humans can use this know how to increase their knowledge. KEES is a Semantic Web Application.

A lot of concepts used by KEES refer to the well known Semantic Web Standards published by the World Wide Web Consortium (W3C).

What is data? According to common sense, KEES defines data as words, numbers or in general any string of symbols. Example of data is the strings xyz, 123, 33.22 or http://LinkedData.Center. Data is usually associated with a data type that states a set of restrictions on symbols sequence that build up the data For example the number 123, the float 33.22 or the URI http://LinkedData.Center. The data type is not the data meaning.

What is information? KEES defines informations as data with a meaning. The meaning can be learned from the context where a data is found or explicitly defined. KEES adopts the RDF standards to describe information by a tuple of three data, i.e. a triple (also known as an RDF statement): a subject, a predicate, and an object. The data type for the first two elements of a triple (i.e. the subject and the predicate) must be a URIs, the last element of the triple (i.e. the object) can be anything. A triple can be also represented as an unidirected labeled graph

KEES defines knowledge as a graph of linked information (i.e. linked data). This graph is possible because, in RDF, any URI can be both the object of a triple and the subject of another one or even the predicate for another. 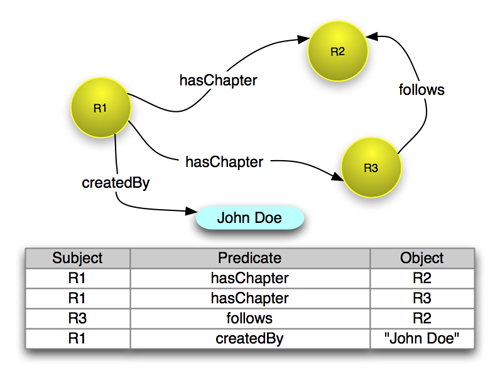 KEES defines knowledge base (or knowledge graph ) as a container of linked data with a purpose, that is a piece of related information that can be queried to provide answers to some questions.

From a theoretical point of view, a knowledge base is composed by information (i.e. facts), plus a formal system of logic used for knowledge representation, plus the Open-world assumption, plus an inference engine that demonstrates theorems.

KEES assumes that RDF is used for knowledge representation and that the knowledge base is implemented as a dataset in a SPARQL service.

The Language Profile (or Application profile) is the portion of the TBOX that is recognized by a specific software application.

The language profile can contain *axioms *. An axiom describes how to generate/validate knowledge base statements using entailment inferred by language profile semantic and known facts. For example, an axiom can be described with OWL and evaluated by an OWL reasoner or described with SPARQL QUERY constructs or with SPARQL UPDATE scripts and evaluated in a SPARQL service.

The KEES Language Profile is the set of all terms, rules, and axioms that a software application that wants to use a knowledge base should understand.

A KEES Agent describes a processor that understands the KEES language profile and that it is able to do actions on a knowledge base according to KEES specifications. It should be able to learn data, reasoning about data and to answer some questions starting from learned fact.

Trust is another key concept in KEES. The Open-world assumption and RDF allow mixing any kind of information, even when information that is incoherent. For instance, suppose that an axiom in your knowledge base TBOX states that a property “person:hasMom” has a cardinality of 1 (i.e. every person has just one “mom”), your knowledge base could also contains two different facts (:jack person:hasMom :Mary) and (:jack person:hasMom :Giulia), perhaps extracted from different data sources. In order to take a decision about who is Jack’s mom, you need trust in your data. If you are sure about the veracity of all data in the knowledge base, you can deduct that: Mary and Giulia are two names for the same person. If you are not so sure, you have two possibility: deduct that the data source is wrong, so you have to choose the most trusted statement with respect some criteria (even casually if both statements have the same trust rank) or to change the axiom in TBOX, allowing a person to have more than one mom. In any case, you need to get an idea about your trust on each statement, both in ABox and in Tbox, in the knowledge base. At least you want to know the provenance and all metadata of all information in your knowledge base because the trust on a single data often derives from the trust of its source or in the creator of the data source.

A KEES system is composed by:

Example of such components are:

A KEES agent performs data ingestion in a knowledge base through a logical sequence of four temporal phases called windows:

Steps 2, 3 and 4 can be iterated till the system converges in a stable configuration. 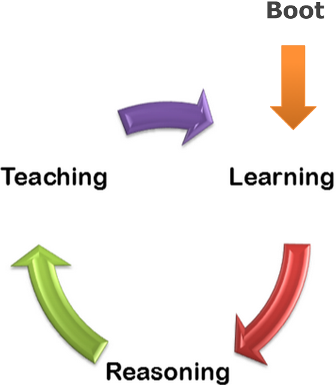 The sequence of plan execution is called KEES workflow and it is a continuous integration process that starts on a triggered event (e.g change in source data, a user request or a scheduled job) on the knowledge base that is in the teaching windows.

Here is a working draft for a KEES implementation proposal

Contributing to this site

A great way to contribute to the site is to create an issue on GitHub when you encounter a problem or something. We always appreciate it. You can also edit the code by yourself and create a pull request.

All stuff here in the Creative Common (unless otherwise noted)